Watch Movies Before They are Released with Movie Screenings 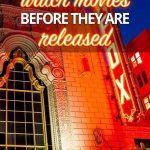 Are you interested in learning how to watch movies before they are released? Last night I saw a movie 5 months before it is going to be released.

It was a fun experience and something I would like to do again. Here are a few things you need to know about how to find movie screenings to attend.

How to Sign Up to Watch Movies Before They are Released

If you want to sign up to watch movies before they are released, you have to start by going to a site called Gofobo.com.

When you sign up (it’s free), they’ll put you on their mailing list. Then you’ll be able to get information about where the free screenings are held and if there are any in your area.

Note that free movie screenings are usually held in select areas. They’re most often held in larger cities so that the production companies have a large pool of screeners to select from.

They want to be sure they get enough viewers in the theater to get good feedback on the screening.

Note that there are other sites that offer sign ups to go to movie screenings too. Here are some of the more popular ones:

Go to each individual site to find out how the sign up and viewing process works. Or to find out if they have screenings in your area.

Going to a movie screening might not be as you would imagine. When I went I was really surprised at how it all worked.

All they will tell you before you go is that you will be seeing one of a list of movies.

The screening company will give you a description of the movie, but they don’t even reveal the name of the movie, often because they haven’t even named the movie yet.

Also, you will likely have to sign a non-disclosure agreement. This means that I am limited to what I can tell you about the screening.

But what I can say is that it was by Paramount Pictures and it was a crime-drama.

When you sign up and get into a screening, you will be limited to what you can share with others about the movie too.

Going to movie screenings can be a great way to watch movies for free.

Side note: There are ways you can watch movies for cheap too, much cheaper than the movie theater normally charges.

I didn’t think watching a movie screening was that big of a deal until I got there. They had a metal detector at the door to get into the theater. And a half-dozen guys in suits that looked like secret service agents.

Apparently, there are people out there who try to bring their cell phone into the theater to record a movie. This screening company does not want to let that happen.

They were so serious about security that they had people survey the audience with night vision goggles to see if anyone had smuggled in a recording device.

Now, not all screenings are like this. Most of the ones that I have gone to in the past were finished, had a title, and were being shown only weeks before the official release.

But you can be confident that they will have serious rules about not bringing recording devices in and about not sharing details of the movie with your friends.

Can I Bring Guests?

You might be wondering if you can bring guests when you watch movies before they are released. Each screening company has their own rules about that.

They’ll let you know when you’re called to see a screening how many tickets you’ll get. If you get more than one you can bring a guest.

They’ll Ask for Your Feedback

Another thing to know is that the screening company will ask for your feedback. That’s the whole point of most screenings.

They want you to tell them what you liked, what you disliked, or what you thought was missing.

The cool thing about these movies is that they actually WANT your feedback. That way they can make changes in production if need be.

I really liked this aspect of the screening last night because, although it was a great movie, there were holes in it. I felt like I had the ability to tell the movie studio what it was lacking and tell them how it could be better.

You never really know if they’ll take your suggestions to heart. I guess the only way to truly know if I had in impact is to go see the movie again in November.

One last thing you should know is that going to movie screenings is not always glorious. You are taking a gamble because you have no idea if the movie is going to be good or not.

Also, it is a decent time commitment. Often you need to get to theater 3 hours in advance and stand in line.

This is a huge struggle for me because I hate lines. If you hate lines, you can always bite the bullet and get tickets through Fandango once the movie comes out.

But if you are into watching movies way in advance that are not a finished production, then this is the way to go. It’s a way for you to watch movies before they are released and do so for free.

Maybe you’ll even have an impact on changes made to the movie in final production!

What do you think of the idea of being able to watch movies before they are released? Is this something you’d like to do?

It’s kind of a different way to participate in surveys where you have an impact on the development of products and services. But one difference is that you get paid for participating in surveys.

Have you ever been to a movie screening? What has your experience been like?

Dos and don'ts for your TF wallet

Episode #8: Back With Goose Finance + Passive...

How to Invest in Real Estate Affordably

@2020 - All Right Reserved. Designed and Developed by https://dailyearntips.com